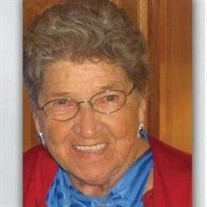 BRADENTON—Doris A. Gilbert, 97, went to be with her Lord on March 7, 2021. She was born on May 4, 1923, in Tioga County, PA, the daughter of Lee and Nina Gilbert. Doris is survived by numerous nieces, nephews, great nieces, and great nephews, and is predeceased by her four brothers, Aubrey, Floyd, Milo, and Claude, husband of Evelyn Gilbert. After graduation from high school, while three of her brothers were overseas fighting in WWII, she worked building Norden bomb sites in a converted Remington typewriter factory. During this time, she felt the Lord’s call to missionary work in Africa. She attended Practical Bible Training School and then trained as a practical nurse. In 1948, she left as a pioneer missionary to Martinique for three years. After a year of language training at the Sorbonne in Paris, France, she worked in the Central African Republic (CAR) for the next 20 years, followed by a year in Chad. Her work during this time included serving as midwife, and many women named their baby girls “Doris Gilbert.” She had no idea how many namesakes she had, but they were all “her kids.” She then spent the next 20 years ministering to college students in France before “retiring” from the foreign field in 1993. “Mama Doris” gathered many more kids who had come from around the world to study in France, some of whom in turn became servants of the Lord. During retirement, she traveled to visit many of them in France, Reunion, and even Mauritius when she was 88! After serving for 45 years as a missionary, she made her retirement home at Bradenton Missionary Village (now Il Villaggio), where she continued serving others. She volunteered as a translator for many years with Bible Alliance, a ministry that provides audio Bible resources for the blind. She was a charter member of Evangel Baptist Church in Lakewood Ranch, where she served as an AWANA leader the entire time and earned the distinction in the last few years of being the oldest AWANA leader in the US. She also volunteered at Lakewood Ranch Medical Center for 10 years. Doris continued to touch the lives of so many even during retirement, and had many more “kids,” as she would call them, and they called her “mom, auntie, grandma, Tatie, and friend.” It’s impossible to know how many kids she had, but they knew she loved them and prayed faithfully for them with a “rejoicing heart.” She enjoyed attending baseball games and events in her kids’ lives, and she was full of boundless energy—she was unstoppable. She was happiest when she was serving the Lord, and she never wavered from that call: “Well done, thou good and faithful servant,” Matthew 25:21. A Committal Service will be held on Saturday, March 13, 10:30 am at Skyway Memorial Gardens, 5200 US Highway 19, Palmetto, FL, 34221. A Celebration of Life Service will take place on Thursday, March 18, 7:00 pm at Evangel Baptist Church, 3605 Lorraine Road, Lakewood Ranch, FL, 34211. Those who wish to remember Doris in a special way in lieu of flowers may make a gift in her memory to Baptist Mid-Missions, 7749 Webster Rd., Cleveland, OH 44130. Jesus Led Me All The Way

The family of Doris A Gilbert created this Life Tributes page to make it easy to share your memories.

BRADENTON—Doris A. Gilbert, 97, went to be with her Lord on March...

Send flowers to the Gilbert family.