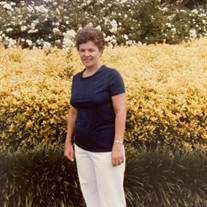 Dorothy Joy Wilson 93, went home to Heaven to join Jesus on September 7, 2021 in Palmetto, Florida, where she lived with her granddaughter Jody and great- granddaughter Marissa. Dorothy was born on December 24, 1927 in Owosso Michigan to parents Claire McKinley Reed (Father) and Floy Pearl Harvey Reed (Mother). Dorothy was the youngest of 6 children, Lauretta Rose, Harlan Roy, LeRoy Foster, Robert Vernon (Bob), and Ralph Elmer Reed. She grew up with her family on a farm in Perry, Michigan owned by her Grandma Reed. Dorothy’s mother, Floy was a gentle, godly loving homemaker and Dorothy’s father, Claire was a hardworking entrepreneur who owned several small businesses to support his family during the depression era. She described her childhood as happy and full of love although finances were limited for most families in that time. She often recalled using humor as a child to offset the financial struggle with a familiar phrase, “What’s for dinner?? Beans, Beans or Beans?” A family inside joke. As a child she enjoyed having fun playing outside with Jim and Jack the family’s beloved dogs and her imagination. Her love and compassion for animals would be a constant theme throughout her life’s journey. Years later, Dorothy met the love of her life, Howard R. Wilson at The Greater Lancing Detective agency where they both worked. They were married in 1961 and raised Dorothy’s children, Carol, Merry and Mike. Together, they cared for Howard’s children, Steve, Karen, Julie, and Danny who joined their blended family from time to time. After the children grew, they moved to Palmetto, Florida. During Howard and Dorothy’s time in Florida they raised three grandchildren. Dorothy is a woman of exemplary character, often sacrificing for the needs of her family. She began working at the age of 18 and was an asset to her employers. She retired from the credit department of NCNB national bank in Sarasota, Florida. Dorothy is the pillar of her family, a woman of great faith and unwavering love. She faithfully read her bible every day and was an avid reader of Christian fiction. The family is certain she has read entire libraries of books. She loved creative writing and wrote poems she would share on rare occasions. Scrapbooking and collecting recipe books were some of her hobbies. However, visiting with family and friends brought the most joy to Dorothy’s heart. The imprint of the love she gave had a vast reach into the generations of her family. She was a warm, loving and kind listening ear to many. Always encouraging with these words, “God will take care of you.” Dorothy is a daughter of King Jesus, she wanted the world to know that she believed and received miracles from the God of heaven, available to everyone. She leaves behind a legacy of love, but her new life has just begun. Dorothy is survived by her daughter Carol Oliver, son-in-law Jack Oliver and son Mike Kaplanis; her grandchildren; Diana, Jody, Kristi, Ricki, Allen, Kyle, Jarred, Joshua, Jennifer, Jessicca, Doug, Jason, Dawn, Charles and Brian; her great-grandchildren; Dekota, Savannah, Emma, Marissa, Zane, Lindsey, Stephen, Julianna, Jayden, Kalee, Michaela, Kevin, Shino, Alec, Heather, Dylan, and Brandon; her great-great-grandchildren; Khloe, Leo, and Kysen; and her Beloved Siamese cat, Benny.

Dorothy Joy Wilson 93, went home to Heaven to join Jesus on September 7, 2021 in Palmetto, Florida, where she lived with her granddaughter Jody and great- granddaughter Marissa. Dorothy was born on December 24, 1927 in Owosso Michigan to parents... View Obituary & Service Information

The family of Dorothy Joy Wilson created this Life Tributes page to make it easy to share your memories.

Send flowers to the Wilson family.