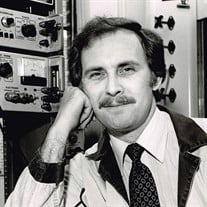 Dr. Eric William Brooman Sep 15, 1940 - Feb 10, 2019 Eric was born in 1940 to parents William and Ethel and grew up in Tottenham, England with his younger sister Brenda. Eric had a love for science and technology, and studied profusely. When not studying, he was a Boy Scout, and enjoyed playing the violin, ballroom dancing, and painting - winning first place in an art competition. Eric earned a degree from the Battersea College of Technology, and a PhD from Cambridge University. While attending college, Eric was injured playing rugby, and while recovering he met the most beautiful and charming physiotherapist - Irene Yelland. Not only did she heal his body, she won his heart. They were married in 1962. Eric and Irene moved to the United States in 1966, where Eric began his career at Battelle Memorial Institute in Columbus, Ohio. He held various research leadership roles, specializing in metallurgy and electrochemistry. His forte was the study and prevention of corrosion. After retiring from Battelle, Eric continued as a consultant for several technology companies and the US Air Force Research Laboratory. During his career, Eric traveled the globe, returning with fascinating stories and mementos from different cultures. He was a lifelong member and contributor to The Electrochemical Society, serving as Secretary from 1988-1992, and honored as a Fellow in 1999. He also published numerous papers and books. Eric enjoyed spending time outdoors with his family - exploring the Smoky & Blue Ridge mountains - camping, fishing, hiking, and boating. He also loved to return to the UK, especially to Cornwall, where he and Irene spent many vacations at their favorite retreat - The Nare Hotel. It was clear that while Eric’s home was in the US, his heart remained in the UK. Eric passed away on February 10, 2019 at Tidewell Hospice in Palmetto, Florida. He is survived by his sister Brenda, son Andrew, and daughter Susan. He will be greatly missed.

Dr. Eric William Brooman Sep 15, 1940 - Feb 10, 2019 Eric was born in 1940 to parents William and Ethel and grew up in Tottenham, England with his younger sister Brenda. Eric had a love for science and technology, and studied profusely.... View Obituary & Service Information

The family of Dr. Eric William Brooman created this Life Tributes page to make it easy to share your memories.

Send flowers to the Brooman family.