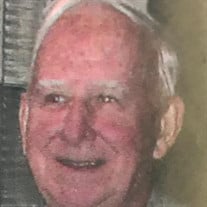 Frederick (Fritz) William Schneider, 84, of Ellenton FL (formally of New Kensington PA), passed away peacefully Tuesday (November 9th, 2021) at his home in Ellenton. Fritz was born August 8, 1937 in McKeesport PA, the son of the late Elizabeth (Burns) Schneider of North Huntington and Frederick Schneider of Jeannette. Shortly after graduating from McKeesport High, Fritz met the love of his life Janice Hoover at a park in the local area. The two of them married in June of 1960, built a home in Allegheny Township and raised 3 sons. Fritz was employed as a steelworker at Edgewater Steel Corp in Oakmont for 38 years. After retiring, he and his wife moved to Ellenton FL, where Janice currently resides. Fritz enjoyed traveling with his wife, sons and grandchildren, golfing, hunting, spending time at the family cabin in Ligonier, sharing a few beers with his co-workers during a Steeler game, and watching his grandchildren participate in various sport functions. Survivors include his loving wife of 61 years, Janice (Hoover) Schneider, 3 sons, Frederick Schneider and wife Clara (Spore) Schneider of Orlando FL, Eric Schneider and companion Luis Marques of Providence RI, and Jeff Schneider and wife Deena (Lazzari) Schneider of Leechburg PA, 4 grandchildren Ashley, Taylor, Justin and Brandon, brother and sister in-law Mike and Judy (Hoover) Panuline of Plum PA, and 2 nephews E. Raymond Tubbs and Shawn Panuline. He was proceeded in death by his parents, Frederick Schneider and Elizabeth (Burns) Schneider, his sister Dolores (Schneider) Tubbs, brother in-law Raymond E. Tubbs and father/mother in-law Kenneth Hoover and Edra Belle (Sutter) Hoover. The family would like to extend their deepest gratitude to the several nurses in the Bradenton/Sarasota area that provided such gentle care and comfort to Fritz over the last several months. Currently there is no memorial service scheduled. A Celebration of Life is being planned for spring 2022 in the Pittsburgh PA area.

The family of Frederick W. Schneider created this Life Tributes page to make it easy to share your memories.

Send flowers to the Schneider family.