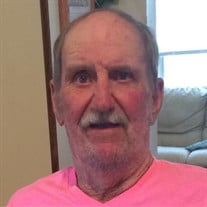 Mr. Gerald H. Pannone, known as Jerry by his family and friends, passed away in Palmetto, FL on November 14, 2016 at the age of 75. Jerry was born in Jackson, Michigan to the late; Angelo and Evelyn M. Pannone. After high school, Jerry enlisted in the US NAVY. He moved to Palmetto several decades ago and worked 33 years as a concrete foreman with Woodruff and Sons Construction. Jerry retired in April of this year. His creativity and detail in design was evident in his work and showcased in the paver paths and designs throughout his "Backyard Garden" where he spent many hours with his love of 30 years, wife of 17, Melba O'Neal. The love they shared was one of great magnitude and "Times." Being a hopeless romantic, anything they did, spontaneous or not, was always an adventure, an experience, "A Time" to be cherished. Jerry was a soft hearted man who loved animals, including his pit bull, weimaraner mix, Izzy, Blazey his border collie and the wild dog, Daisy, from work that he befriended. Daisy was known to visit the shop everyday that Jerry was absent once he was diagnosed with cancer and began treatments. Jerry stayed true to his character til the end. He loved flounder gigging, dressing up at Halloween for the grandkids and neighborhood kids, having his garden parties, and making use of the 2 man caves, that were sheds from the outside, but flooring and paint on the insides, each one as different and distinct as the paths he laid. He laid a foundation for his family to follow, one of respect, honor, dignity, strength, love, excitement and "Times." Jerry is survived by his beloved wife, Melba Pannone, sons; Erik (Lisa) Pannone, James Griffin, II, step daughters; Misty Dawn (Eric) Peterson, Sharlotte (Matthew) Tykal, Lee Matevich, brothers: Robert "Bob" Pannone, Richard "Dick" (Paulette) Pannone, sister, Dottie (Marsh) Wolfe, grandchildren; Kaley Pannone, Darius Tykal, Michael and Jackson Matevich, Marian and Georgia Peterson. Jerry was preceded in death by his parents. A home Garden Gathering will be held at a future date, not yet determined. In lieu of flowers, contributions in Jerry's honor and love for animals may be made to any No Kill Shelter of their choice or the ASPCA. Arrangements have been entrusted to Skyway Memorial Funeral Home. Online condolences can be made at www.SkywayMemorial.com

Mr. Gerald H. Pannone, known as Jerry by his family and friends, passed away in Palmetto, FL on November 14, 2016 at the age of 75. Jerry was born in Jackson, Michigan to the late; Angelo and Evelyn M. Pannone. After high school, Jerry enlisted... View Obituary & Service Information

The family of Mr. Gerald "Jerry" Howard Pannone created this Life Tributes page to make it easy to share your memories.

Mr. Gerald H. Pannone, known as Jerry by his family and friends,...

Send flowers to the Pannone family.