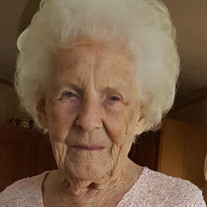 BRADFORD, Gladys Willis (Palmer), 104 years, wife of the late Clarence W. Bradford of Hallowell, Maine passed away in Sarasota, Florida on July 9, 2020. She was born in Boston, MA and lived for over 60 years in Quincy, MA prior to her retirement to East Wareham, MA and Ellenton, FL. She graduated from Quincy High School with the Class of 1933. She worked in the office of W.T. Grant for nine years, and joined the Coast Guard Reserves during WW2 and served at Bethlehem Steel. Gladys worked for Boston Gear Works for thirty-two years as Production Controller of Special Jobbing. She was a Past Noble Grand and Financial Secretary of Reliance Rebekah Lodge of Wollaston, MA and she held the Degree of Chivalry from the Grand Lodge of Massachusetts. She was active in square and round dancing, had her Radio Ham License, and was an avid computer person. In retirement she became a longtime Volunteer at Manatee Memorial Hospital. She was also active in the Colony Cove Community as secretary to the Hobby and Shuffle Clubs. Gladys wrote monthly articles for the Colony Cove Breeze, was a member of the Manatee Chapter of DAR, Manatee Genealogy Club. In her later years, she authored a book, “Pilgrim Of Faith”. In her early years she was a member of the North Quincy Congregational Church before joining the Seventh Day Adventist Church. She attended the Boston Temple Church in Boston, later transferring to the Brockton Church. On retirement to Florida, Gladys transferred to the Palmetto Church where she served as a Deaconess. in Community Services and Van Ministries. Left to mourn her passing is her daughter-in-law Donna Bradford of Plymouth, MA, her granddaughter Christine Morrissey and her husband Joseph of Middleboro, MA and five great grandchildren: Joseph Morrissey, Megan Morrissey, Ryan Morrissey, Tyler Bradford and Connor Bradford of Kingston, MA as well as many nieces and nephews. Her son, William R. Bradford, her grandson, William R. Bradford, Jr., and her five brothers: Richard Palmer, Charles Palmer, Frederick Palmer Robert Palmer and Caleb Palmer Jr. all predeceased her. A viewing will be held on Saturday July 11, 2020 from 4-6 pm at Skyway Memorial Funeral Home 5200 US Highway 19 N Palmetto Fl 34221. A Funeral services will be held at Palmetto SDA Church 3307 10th St W, Palmetto, FL 34221 on Sunday July 12, 2020 at 10 am. Burial will be in Warrentown Cemetery in Middleboro, MA.

BRADFORD, Gladys Willis (Palmer), 104 years, wife of the late Clarence W. Bradford of Hallowell, Maine passed away in Sarasota, Florida on July 9, 2020. She was born in Boston, MA and lived for over 60 years in Quincy, MA prior to her retirement... View Obituary & Service Information

The family of Gladys Bradford created this Life Tributes page to make it easy to share your memories.

Send flowers to the Bradford family.