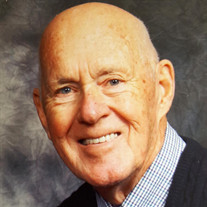 Dr. Jack L. Johnston, 87, of Bradenton, FL completed his bucket list and went into the arms of his Lord and savior on Pearl Harbor Day, December 7, 2016. Jack was born June 22, 1929 in West Virginia to his late parents Earl and Inez Johnston. After graduating in 1948 from Sutton High School, he entered the US Navy. He served four years as an optical repairman at Pearl Harbor. Afterwards, he attended Florida State University knowing that he wanted to be an optometrist. Jack met his wife, Roberta, in Memphis while attending Southern College of Optometry. They were married in 1956. He graduated in 1957 and immediately moved to Bradenton where he formed an optometry partnership with Dr. Joseph Moore. Jack was one of the first doctors with the knowledge of fitting contact lenses in this area. He later formed an Ophthalmic equipment distributor business, which became known as West Coast Optical. It was recognized in Inc, 500. Jack enjoyed sports. He played basketball, football, softball, golf, and bowling. He was a member of First Church of the Nazarene, Bradenton Country Club, and Kiwanis Club. He enjoyed traveling and has been to all states except Vermont. He was a friend of many and wore many hats; loving husband, father, Pap-paw, professional, and entrepreneur. He is survived by his wife, Roberta, three children, Jeffery (Kathy) Johnston, Janice (Phil) Herschel, and Jay (Andrea) Johnston; six grandchildren, Jack, Abby Johnston, Clint Herschel, Cliff (Alise) Herschel, Jessica (Jon) Spence, and Spencer Johnston; two great-grandchildren, Julia Spence and Easton Herschel; and brother Joseph Johnston of Vero Beach. Memorial services will be at a later date. Skyway Memorial Funeral Home in charge of arrangements. The family wishes to thank all the loving staff at Freedom Village, and Tidewell Hospice for Jack’s care and support. Memorial donations may be made to Southeastern Guide Dogs, 4210 77th St E, Palmetto, FL 34221.

Dr. Jack L. Johnston, 87, of Bradenton, FL completed his bucket list and went into the arms of his Lord and savior on Pearl Harbor Day, December 7, 2016. Jack was born June 22, 1929 in West Virginia to his late parents Earl and Inez... View Obituary & Service Information

The family of Dr. Jack Lee Johnston created this Life Tributes page to make it easy to share your memories.

Send flowers to the Johnston family.