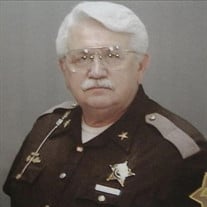 James K. Wallace, 81, of Palmetto, Florida, passed away peacefully on Sunday, March 6, 2022, at Manatee Memorial Hospital. Born June 18, 1940, in Valparaiso, Indiana, Jim was one of four children of the late Woodrow and Mary Catherine (Spagna) Wallace. After graduating high school, Jim proudly served as a member of the U.S. Marine Corps for four years. He continued his public service as Indiana State Trooper for 26 years and, following retirement from the State Police, was elected as a 2-term Sheriff of Jasper County, Indiana, and served for 8 years until his retirement in 2002. During Jim’s distinguished law enforcement career, he oversaw some of the largest police activities in Northern Indiana, often involving extended undercover work and Drug Enforcement. Jim married his best friend, Trudy (Huff) in 1960 and shared a life with her for 61 years. Together they raised their sons and enjoyed grandchildren and great grandchildren. Jim loved motorcycles, especially his peaceful rides out West and throughout the Appalachian Mountains, tinkering in his shop on his projects and creating family heirlooms in his woodshop, and authoring several published books. He spent countless hours and took great pride watching his sons and grandchildren excel in their chosen activities and athletics, including inspiring his children and several of his grandchildren to pursue careers in the Armed Services and Law Enforcement, and followed with great interest their accomplishments in Track & Field – a sport in which he competed in the Shot Put as a Marine during his service. Along with his parents, Jim is preceded in death by his grandson, Jordan Wallace, and his sister, Olivia. He will be remembered and missed by his wife Trudy (Huff) Wallace; his three sons, James W. Wallace, Jeffrey E. (Kayleen) Wallace and Jason E. (Brooke) Wallace; his grandchildren, Andy, Zachary (Teress), Allie, Jimmy, Jamie (Michael) Adam, Micah (Breanne), and Jesse (Miryam); and his great-grandchildren, Dean, Dominic, Noah, Madilyn and Henry. A memorial service is being planned for a future date. Arrangements have been entrusted to Skyway Memorial Funeral Home and Gardens, Palmetto, FL. www.skywaymemorial.com.

The family of James K. Wallace created this Life Tributes page to make it easy to share your memories.

Send flowers to the Wallace family.