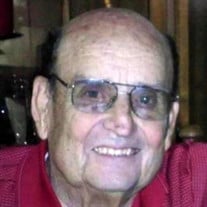 On November 1, 2020, Jessie Lee Vail went home to be with his Savior, Jesus Christ. Jessie was born in Harrisburg, Arkansas on July 28, 1935 and his incredible life story, molded by the hands of God, was only just beginning. In 1954, Jessie joined the United States Navy and served as an Electrician's Mate First Class as part of the USS Triton Submerged Circumnavigation Crew during Operation Sandblast. Jessie served in the Navy for 20 years and it was during his time of service that he met his sweetheart of 62 years, Muriel. In 1963, the course of Jessie’s life changed forever when he attended a church service, met Christ, and became a born-again Christian. After that he was always excited for any opportunity to tell the story of this precious encounter. After accepting Jesus as his Savior, Jessie joined the ministry, put himself through seminary and gained a masters in theology. He then became a pastor, serving as the founding pastor of Hood Canal Chapel in Belfair, Washington. Jessie also served as interim pastor of Trinity Baptist Church in Niskayuna, New York. Following his time in the ministry, Jessie used the skills he learned in the Navy to become a nuclear engineer, working at power plants such as Vermont Yankee. It is without question that Jessie is a testament that through Christ, all things truly are possible. The undying love Jessie had for his family was exemplified by his fervent prayers that they too accept Jesus as their Lord and Savior and God answered those prayers. His wife, all of his children, and all of his grandchildren will one day join him in heaven. Jessie's wish was not for a funeral or memorial service but for his family to honor him through glorifying God in all that they do. Jessie will be lovingly remembered by his "sweetie," Muriel; children: Debbie (Harold) Schneiderwind, Bodie (Theresa) Vail, Karen (Scott) Johnson, Tom (Jenny) Vail, his 12 grandchildren, and 10 great-grandchildren. Jessie was predeceased by his parents, William and Vera Vail of Harrisburg, Arkansas, and by his sister, Barbara Ellen Hogan of Champaign, Illinois and a host of other family and friends. Thank you, Sweetie/Jessie/Daddy/Pop for what you have taught us through your example. We will miss you terribly but are so grateful that we will be reunited with you in heaven someday. And oh, what a glorious day that will be!

On November 1, 2020, Jessie Lee Vail went home to be with his Savior, Jesus Christ. Jessie was born in Harrisburg, Arkansas on July 28, 1935 and his incredible life story, molded by the hands of God, was only just beginning. In 1954, Jessie... View Obituary & Service Information

The family of Jessie Vail created this Life Tributes page to make it easy to share your memories.

Send flowers to the Vail family.