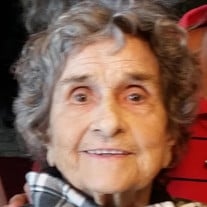 Johanna “Hanna” Kissinger Betat, age 89, died in her Palmetto home surrounded by loved ones on Thursday, August 31, 2017. Johanna was born October 15, 1927, in the German village of Furstenfeld 1, Romania. She was the daughter of Daniel and Amalia Kissinger. At age 12, Hanna lost her mother and, as a result, much of the joys of childhood. She assumed her mother’s responsibilities of caring for three younger siblings along with providing for her father and three older brothers. In 1949, Hanna married the love of her life, Kurt George Betat. In 1951 they immigrated from Germany to the U.S. in hopes of a better life for their family. As a lifetime Seventh-day Adventist, Hanna’s faith and compassion steered her life decisions and gave her courage and hope. With only minimal education, Hanna was a skilled and resourceful problem-solver and took pride and care in all her work. Her life-time skills were only surpassed by her cheerful and giving spirit. Hanna was blessed with a lovely voice and she sang beautifully as she went about her days. Family and friends were Hanna’s passion and life. She had a deep appreciation for good food and took pleasure in setting beautiful tables of festivity for others. She was ever mindful of the needs of her loved ones as well as for those less fortunate. Hanna loved early mornings, tending her flower gardens, and making strudel. Hanna is survived by her loving husband of 67 years, Kurt George Betat and her seven children: Sigrid Leavitt (Art), Elly Knight-Herber (Erich Herber), Beverly Schmidt (Mark), Rickey Betat (Petra), Darlene Betat (Skip Russell), Tina Houghtaling (Buddy), Edelweis Walker (Cam), her 20 grandchildren, 21 great-grandchildren and her sister, Alwine Kissinger Tscherny. Hanna is predeceased by her siblings, Melita Kissinger Quast, Adam “Adi” Kissinger, Hans Kissinger, Willie Kissinger, Phillip Kissinger and Barbara Kissinger Franke. A Celebration of Life will be held at the Palmetto Seventh-day Adventist Church on Sunday, September 3, 2017, at 1 pm. A funeral service will be held at the Skyway Funeral Home on Tuesday, September 5, 2017, at 11 am. Visitation with the family will begin at 10 am. Condolences may be made to the family at SkywayMemorial.com.

The family of Johanna Betat created this Life Tributes page to make it easy to share your memories.

Send flowers to the Betat family.