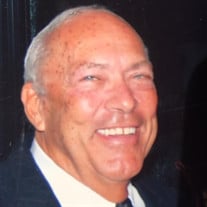 John F. “Jack” Black, 81, of Siesta Key, FL, formerly of North Olmsted, OH, passed away with his family surrounding him on February 14, 2019 in Sarasota, FL. Beloved husband of Jean (Seedhouse); loving father of John, Jeffrey (Melinda), and Joseph (Jackie) Black; dear grandfather of Rachel, John, Jessica, Jeremy, Jackson, Macy, and Owen. He was preceded in death by his parents Ray and Virginia (Foster) Black; and sister Peg Johnston. Jack was a successful businessman who graduated from Kent State University where he met his loving wife Jean. He worked for Green Giant, Campbell's Soup, served in the U S Army Reserve and culminated his career as President of the Kroehle Company where he retired. Avid golfer and fisherman, upon retiring Jack and his wife Jean divided their time between Siesta Key, FL and Saxonburg, PA spending time with family and friends in both locations enjoying a wonderful life together. Defying the odds by being a 21-year survivor of a heart transplant at the Cleveland Clinic, Jack spent his post-transplant life donating, giving his time, and working with several community and volunteer groups including Meals on Wheels, and speaking for the Mended Hearts. The family plans on having a memorial service at Faith Lutheran Church in Sarasota, FL during the month of March at a date to be determined later. Jean has requested no flowers or gifts be sent, but instead donations made in honor of John F. Black, to All Faiths Food Bank, 8171 Blaikie Court, Sarasota, FL 34240. www.allfaithsfoodbank.org

The family of John F. Black created this Life Tributes page to make it easy to share your memories.

Send flowers to the Black family.