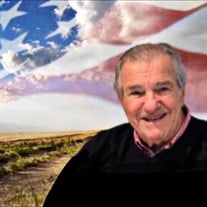 John Joseph (Jay) Nocivelli Sun City Center, FL – John J. Nocivelli, 86, died peacefully at his home on December 10, 2019 after a brief illness. He was born August 11, 1933 in Somerville, Massachusetts, the son of John and Mary (Celli) Nocivelli. John attended Arlington, Massachusetts public schools and served in the U.S. Army. He worked for many years as a plant manager for Unifirst in their Ohio, Maryland and Florida locations. He was married to the late Marjorie (White) Nocivelli who died in 2008 and the late Mary (MacDonough Burke) Nocivelli who died in January of this year. In addition to his parents and spouses, he was predeceased by his brother Paul, step-son Donald and step-daughter Judith. He is survived by his loving step-children Patricia Reeder and her husband Charles of Dade City, FL, Richard Weeks and his wife Tracy of Yarmouth Port, MA, Charles Weeks and his wife Sara of Fitchburg, MA, Thomas Weeks of Union Township, NJ, Stephen Gay and his wife Judith of Clinton, CT, Kathy Horan and her husband Michael of Maynard, MA, Patricia Longo and her husband Larry of Charlestown, MA, Maryann Deignan and her husband Chris of Charlestown, MA, Jerry Burke and his wife Kate of Pittsfield, MA, his niece Sandra McCoole and her husband Cahir of Marblehead, MA, and his many grandchildren and great-grandchildren. A memorial service will be held at 1:00 p.m. Wednesday, December 18 at Trinity Baptist Church, 702 W. Del Webb Blvd., Sun City Center, FL 33573. Burial will be private. Those who wish to remember John in a special way may make gifts in his memory to the Sun City Center Emergency Squad, 720 Ray Watson Drive, Sun City Center, FL 33573.

The family of John "Jay" Joseph Nocivelli created this Life Tributes page to make it easy to share your memories.

Send flowers to the Nocivelli family.