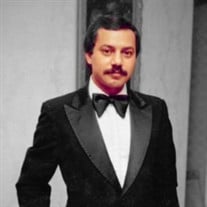 Magdi Boutros 68, of Palmetto, FL passed away on April 21, 2021. Magdi was born July 20, 1952 in Alexandrea, Egypt. He moved to the United States in the late 70's, becoming an American citizen in 1986. Magdi was educated in Egypt and Lebanon, was fluent in English, French and Arabic. He loved to travel. In 1981 Magdi married Pauline Stepnowski; they resided in Pembroke Pines, FL. until 2015. Magdi's jobs included travel agent at Hollywood Travel in Hollywood, FL and later, Manager of Aventura Travel in Aventura, FL. Eventually, he opened his own travel agency in Aventura called TPI, Travel Professional International. Magdi was very active in the travel community and was a Certified Travel Consultant. He enjoyed traveling with his wife and his extended family, frequently taking FAM trips overseas to Europe. In 1997 Magdi joined American Airlines as a flight attendant. He quickly moved up the ranks where he became a purser. After 15 years, on May 20, 2014, he decided to retire. Looking for a quieter lifestyle, he and his wife moved to Hutchinson Island on the east coast of Florida. In an effort to live closer to his family, they next moved to Terra Ceia Bay in Palmetto, FL. In the Terra Ceia Village, he made friends very quickly. Magdi leaves behind his loving wife of almost 40 years, Pauline Stepnowski Boutros, his dear sister Doris Boutros Cantrell of Plano, TX, his brother Waguih Ramzi Boutros of Odessa, FL, and his youngest brother, Samuel Ramzi Boutros of Tierra Verde, FL. He also leaves numerous nieces and nephews on both sides of the family and many friends from around the world. He had a "heart of gold" and was loved by all.A memorial service will be held at St. Mary and St. Mina Coptic Orthodox Church 2930 County Road 193 Clearwater, FL 33759 on June 12th. In lieu of flowers donations https://www.srtr.org/transplant-centers/adventhealth-orlando-flfh/?organ=liver&recipientType=adult&donorType=

Magdi Boutros 68, of Palmetto, FL passed away on April 21, 2021. Magdi was born July 20, 1952 in Alexandrea, Egypt. He moved to the United States in the late 70's, becoming an American citizen in 1986. Magdi was educated in Egypt and Lebanon,... View Obituary & Service Information

The family of Magdi Boutros created this Life Tributes page to make it easy to share your memories.

Send flowers to the Boutros family.