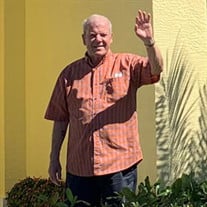 On April 11, 2021, Miguel Pacheco, a widower, father, small business owner, and supportive friend to just about everyone he ever met during his 84 years, passed away in Bradenton. Miguel was a proud Portuguese American. He was born in Massachusetts in 1936 and moved back to his mother's homeland in St. Michael in the Azores when he was a baby. He lost his father at a young age and began working to help his mother and five siblings. Miguel came to the United States to join his family in Rhode Island when he was a teenager. Miguel took a job at a jewelry factory, and the industry became his passion. It was a profession that allowed him to showcase his work ethic, ingenuity, dependability, and professionalism. In the eighties, he took a chance and left the corporation that employed him to start his own business, MCP Polishing. He ran the successful small business in Riverside, Rhode Island, for over 30 years with his wife, Claire. Miguel met Claire in the late sixties, and in 1970 they were married. A year later, their only son was born. He supported his family, made countless friends, and kept his yard in impeccable condition in his adopted hometown of East Providence, Rhode Island, for more than 40 years. The couple relocated full-time to Bradenton, Florida, in 2018 and celebrated 50 years of marriage in 2020. Just a few months later, his wife Claire lost a long and trying battle with COPD. Miguel took care of her every need during the last few years of her life. In March 2021, he complained about a breathing issue and was diagnosed with cancer, and a month later, he died. Miguel lived a full 84 years; his humor, wisdom, and support will last much longer. He leaves behind his son, Michael, daughter-in-law, Kimberly, and grandchildren, William, and Tyler.

On April 11, 2021, Miguel Pacheco, a widower, father, small business owner, and supportive friend to just about everyone he ever met during his 84 years, passed away in Bradenton. Miguel was a proud Portuguese American. He was born in Massachusetts... View Obituary & Service Information

The family of Miguel Pacheco created this Life Tributes page to make it easy to share your memories.

Send flowers to the Pacheco family.