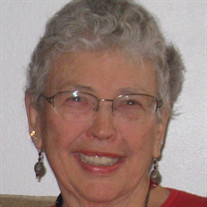 Memories of our mom Miriam ; Dear family and friends, It is with great sadness that we are writing to let you know that our Mom passed away peacefully in her sleep on November 1, 2019 in Sarasota, Florida. We hope you... View Obituary & Service Information

The family of Miriam Annette Berninger created this Life Tributes page to make it easy to share your memories.

Memories of our mom Miriam ;
Dear family and friends,

Send flowers to the Berninger family.