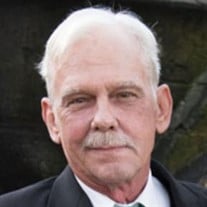 Randall “Randy” Timothy Ryals, 65, of Palmetto, FL, passed away peacefully on Sunday, July 2, 2017. He was born to Woodrow and Martha Ryals on January 11, 1952, in Macon GA. He graduated from Palmetto High School in 1971. He served in the National Guard. He also attended State College of Florida, formerly Manatee Junior College. Randy was a hard worker, loyal friend and loving father. He would not turn down a friendly card game or a friend in need. Randy enjoyed being outdoors and had a gift for growing anything which stemmed from his vast knowledge of landscaping, tree trimming and plants. He took great personal pride in every occupation he held before retiring. Randall was previously married to Andrea Jones and is survived by their two sons and three daughters; Sherrie (Eric) Loria, Randall Eric Ryals, Andrew Ryals, Blair Ryals and Brooke (Joe) McCourt. He is also survived by his seven grandchildren; Derek, Niko, Maya, Alyssa, Aiden, Ethan and Sydney. Nothing brought more joy to Randy than showing his love for his grandbabies. He was preceded in death by his parents, Woodrow and Martha Ryals; and his sister, Diane Yeomans. He is also survived by his brother, Ennis Ryals, and sister, Martha Temples. The family will receive friends from 2:00 pm-2:30 pm on Sat. July 8, 2017 at Skyway Funeral Home, followed by a celebration of life at 2:30 pm at the funeral home. Interment will take place in Skyway Memorial Gardens. The family wishes to extend their gratitude to the special people at Tidewell Hospice of Ellenton for their support in his final days. Condolences may be made to the family at SkywayMemorial.com.

The family of Randall "Randy" Timothy Ryals created this Life Tributes page to make it easy to share your memories.

Send flowers to the Ryals family.