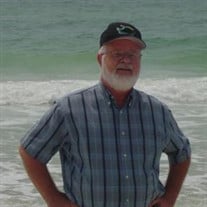 On Thursday, December 3rd, 2020, Robert Jonah Roberts, loving husband and father, passed away peacefully in his home surrounded by family at the age of 87. Robert who was more commonly referred to as Bob, was born in May 1933 in Scranton Pennsylvania to John and Thea Roberts. He received his teaching degree from Syracuse University and master’s degree at Queens College in 1961, teaching music to students of all ages for nearly 40 years in schools across New York State. On December 31st, 1955, he married Lois Dorothy Hewett and together they raised two sons, John and Rick, their daughter Judy and numerous farm animals just for the fun of it. While teaching was his calling, business was his passion. Over his life Bob owned a trading company, a music store, rental properties, a restaurant boarding house, and a piano tuning company which provided him the opportunity to tune the pianos for the 1969 Woodstock music festival in Bethel NY. Bob was an inventor, innovator, author and a gifted artist in his own right, seemingly successful in any endeavor that caught his imagination. After retiring from teaching Bob sought a simpler life, shedding unnecessary possessions and burdens that in the end meant little to the meaningful life he desired. He moved south marrying his soulmate Carol Hicks in 1998 enjoying life together in the Florida sunshine. With simplicity came spirituality inspiring him to help countless others suffering from anxiety, fear and depression. Bob was a gentle soul with a big heart. Bob is survived by his loving wife Carol, his son John, his stepdaughter Jennifer, his grandchildren Matthew, Jessica, Ashley and Ivy and his eight great grandchildren. A modest man by nature, Bob made it known that he wanted no funeral or service but rather have his ashes scattered over his deceased children’s graves with the remainder being cast into his favorite fishing hole in Woodbourne NY. In lieu of flowers the family asks that donations be made to Tidewell Hospice Services in memory of Robert J. Roberts. Checks can be made payable to: Tidewell Hospice Philanthropy Department 5955 Rand Blvd. Sarasota FL 34238 Or online at Givetotidewell.org

On Thursday, December 3rd, 2020, Robert Jonah Roberts, loving husband and father, passed away peacefully in his home surrounded by family at the age of 87. Robert who was more commonly referred to as Bob, was born in May 1933 in Scranton Pennsylvania... View Obituary & Service Information

The family of Robert J Roberts created this Life Tributes page to make it easy to share your memories.

Send flowers to the Roberts family.