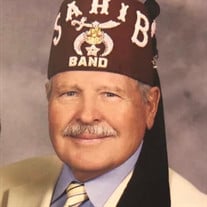 PARRISH, FL - Russell L. Bunger, 90, died of natural causes, October 8, 2019, at Tidewell Hospice. He was born December 14, 1928 in West Sonora, Ohio, the son of Clyde DeWitt and Ruth Lucille (Rhinehart) Bunger. After graduating from Lewisburg Union High School, Russell attended Ohio Northern University, graduating with a BA in 1952. He married Norma Jean Burris, in 1949. After college, they settled in Lewisburg, Ohio and raised 6 children, eventually relocating to Youngstown, OH (1969) and Pittsford, NY (1980). They were divorced, and Russell moved to Florida, where he married his current wife, Sue (Jennings).Bunger in 1998. Russell and Sue originally settled in Deerfield Beach, FL, later moving to Parrish, FL, where they are both avid tennis players and attend Parrish United Methodist Church. Throughout his adulthood, Russell was active with the Masonic order, primarily with the Masons of Ohio, from whom he received a 65-year service award. He was also a life-long Shriner, originally donning the fez at the Antioch Shrine Temple in Dayton, Ohio. He was fortunate to share his love of music, playing the cornet and trumpet, throughout his life, in many Shrine bands, as well as other local concert and marching bands, in Ohio, New York State, and Florida. He was also very involved with the Boy Scouts of America, having been a past-President of the Mahoning Valley Council, attending the 1977 National Scout Jamboree in Pennsylvania, and that same year, receiving the Silver Beaver medal, the highest award in Scouting. Russell was a life-long sports and fitness enthusiast, having played basketball in high school, and later, referee-ing high school basketball games. He loved to play tennis and golf. He was a member of Oak Hill Country Club in Rochester, NY and was active in bringing PGA tournaments to the club, including the 1984 Senior Open and the 1989 U.S. Open. Russell was a long-time Agency Manager for the Equitable Life Assurance Society of America (now part of AXA Advisors) in Ohio and New York State, retiring in 1986. He was a proud member of the Certified Life Underwriters, a prominent professional organization in the insurance industry. An only child, Russell was pre-deceased by his parents, Ruth and Clyde Bunger, as well as many aunts and uncles. Surviving him are his wife Sue, of Parrish, FL; his six children: Steven Bunger of Ohio, Susan Bunger of Florida, Sheri Frick of Michigan, Sally Acri of Ohio, Samuel Bunger of New York, and Shaun Bunger of California. In addition, he is survived by 13 grandchildren and 6 great-grandchildren. Arrangements handled by Skyway Memorial In Palmetto, Florida. Online condolences can be made on the tribute page at skywaymemorial.com

The family of Russell L Bunger created this Life Tributes page to make it easy to share your memories.

Send flowers to the Bunger family.