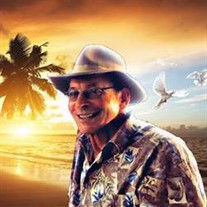 Steven Jay Smykowski (April 23,1957-December 2, 2019) Steven Jay Smykowski, age 62, of Palmetto, Florida (formerly of Watertown, SD) passed away on Monday, December 2, 2019 following a short but courageous battle with cancer. Steve, also known as Smy, was born in Morris, MN to Ted and Marjorie (Hoeper) Smykowski on April 23, 1957. He attended school in Wilmar, MN and in Watertown, SD where he graduated in 1975. On March 27, 1976 he married Rosita Izzo and to this union 3 children were born. His kids were his greatest pride in life. He married Lisa Simons on Oct 20,1998. Steve began his welding career in Wahpeton, ND working at WelRich for a short time before he relocated back to Watertown. He began working at Terex (formerly Telelect) in 1983 where he worked as a welder, installer and other various positions over the years. He started his own drywall business in the 90’s operating Smykowski Taping and Texturing for 10 years before he returned to Terex and continued to work until 2014. He retired to Palmetto, Florida in October 2014 where he resided until his death. Smy will be fondly remembered by the many friends he made during his life, especially the ones he made during the five years he spent at Fisherman’s Cove in Palmetto. He referred to Fisherman’s Cove as his paradise and truly loved his home. He loved people and he loved the outdoors. He was known for being out on his patio feeding the wild animals and birds and visiting with anyone walking by. He was always working on a project in his house, outside his house or creating a new recipe in the kitchen. His smile was radiant and if you knew Steve he made an impact on your life, he always had something to teach you. He was a generous friend and neighbor that would always lend a hand to his family, a friend or even a complete stranger. He always tried to do the best he could at everything he did. He will be greatly missed by us all. Steve had many talents and hobbies, but his true passion was for trap, skeet and sporting clays. He spent a lifetime honing his skills as a target shooter and enjoyed it most when sharing it with family and friends. He was a lifetime member of the National Skeet Shooting Association (NSSA) and was widely recognized at gun clubs in South Dakota, North Dakota, and Sarasota, Fl. He was known for shooting his small caliber .410 shotgun as a means to sharpen his skills. Steve is preceded in death by his mother and father and survived by his wife Lisa; his children Richard (Megan) Smykowski, Stefanie Smykowski and Joelle Smykowski; stepchildren Jason Simons and Amanda Simons; siblings Randy Smykowski, Michael Smykowski, Joleen Katchmark and Janel Dolezal and two grandchildren, Briella and Issac. The family will celebrate Steve’s life at a later date. Steve’s family would like to extend their sincere gratitude to Tidewell Hospice for the compassionate care they extended to him and his family during his last days.

The family of Steven Jay Smykowski created this Life Tributes page to make it easy to share your memories.

Send flowers to the Smykowski family.