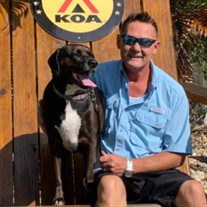 Thomas A. “Harry” Bricker, 54, of Bradenton, FL, passed away on November 8, 2021. Tom was born June 7, 1967, to Edward and Laura (Cumpston) Bricker. He was known by many names: Tom, Tommy, Harry or Jesi. We called him Harry after his great-grandfather, as they both had the same mannerisms. Tom was a barber/stylist and used his time and skill to help those who were shut-in or homeless. Tom loved camping, spending time with family, traveling, all things Disney, and making people laugh (that was his specialty). Tom was preceded in death by his mother, Laura Bricker, and brother, Charles Brown, Jr. He is survived by his wife of 14 years, Debra Bricker; Debra’s children, Travis Schmeisser, Josh Story, and Meghan (Tobias) Ebner; granddaughters, Mila and Alani Ebner; father, Edward Bricker, and step-mother, Janet Bricker; siblings, Helen (Bob) Devereaux, and Clifford (Michelle) Brown; nieces, Danielle (Chris) Newsome, Megan (Josh) Mimbs, Ella Brown, and Elisabeth Brown; nephew, CJ Brown; great-niece, Kate Newsome, and great-nephew, Luke Newsome; uncle, Thomas Bricker, of Tarpon Springs; aunt, Margaret Cumpston, of Port Charlotte; and many, many cousins, extended family, and friends. Tom was a character in many ways. If he loved you, you knew it because you were inducted into his family as an aunt, uncle, sister, or brother. He didn’t know a stranger! He was loved dearly and will be missed, but he will always live on in our hearts and memories. A graveside service for family and friends will be held at Skyway Memorial, Palmetto, FL on Friday, November 19, 2021 at 11am www.skywaymemorial.com. In lieu of flowers, donations may be made in his memory to Nate’s Honor Animal Rescue, 4951 Lorraine Road, Bradenton, FL 34211.

The family of Thomas "Harry" A. Bricker created this Life Tributes page to make it easy to share your memories.

Send flowers to the Bricker family.