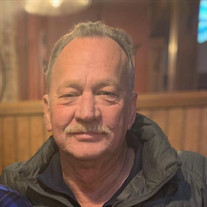 Wesley D. "Wes" Dyer (66yrs), of Palmetto, Fl., Formerly Dublin, OH., Formerly Bellefontaine, OH, died on December 18th, 2020, at St. Anthony's Hospital in St. Petersburg, FL. Wes graduated from Benjiman Logan High School in Logan County, OH. He worked construction for many years and finished his career as a salesman in Columbus, OH were he had just recently retired. Wes was a beloved husband who had taken his step-daughter under his wing and had became a step-grandfather to three granddaughters and one grandson who he got to watch grow into adulthood. He was a son, a brother, and a great friend with an infectious personality to everyone he met. Wes had been fighting almost a year-long battle with cancer, and had also sustained injuries in a car accident in October of 2020 which he was still attempting to recover. Wes is preceded by his father Robert "Bob" Dyer of Bellefontaine,OH. Wes leaves behind his wife Debbie Dyer of Palmetto, Fl.; His mother Jean (Allen) Dyer, and sister Valerie Rhoades (Dale) of Bellefontaine, OH.; Brother Rick Dyer of Marysville, Ohio; Step-daughter Laynya Hamman of West Palm, Fl.; Step-granddaughters Cortny Stricker (and Fiancee Kyle Quick) of Palmetto,FL.; Katelyn Hamman of Delaware,OH.; Kyle (Courtney) Hamman and Grace Hamman of Columbus, OH.; followed by three nieces and one nephew. Per Wes' wishes he will be cremated, in hopes that a service or celebration of life will be held at a later date with family.

The family of Wesley D Dyer created this Life Tributes page to make it easy to share your memories.

Send flowers to the Dyer family.