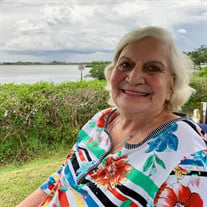 Betty Leffel passed away on August 30, 2020, with a joyful heart and the spirit of her Lord singing from within. No matter what she faced, Betty faced it head on, with a smile and a song. Born on June 26, 1934, Betty overcame a life filled with adversity, from growing up during The Great Depression to a decades-long battle with dementia and Alzheimer's. But still, she smiled. Even while she battled Covid, alone and in the hospital, she filled the halls with joyful songs and spiritual hymns, singing to herself, her nurses, and through the phone, to her family. Because of her strong will, she defeated Covid after weeks of battling the virus alone, quarantined from her family. It was a few days after her first negative test result, that she succumbed to kidney failure from dehydration, as a result of her extended stay in a Covid rehab facility, where she was awaiting a second negative test result, and the lack of care she received from the healthcare system failed her. Whatever she was up against, Betty always had a song in her heart, and even when her voice left her, toward the end, the music carried her home. In life, she was known for always saying precisely what she felt in her heart, her strong will, her ever-present smile, and for the songs she sang to her daughters and grandchildren. “Que Sera Sera,” by Doris Day, was one of her favorites. She had an optimistic heart and was a hopeless romantic. She had a love of old movies, glamorous movie stars, cats and music. She is survived by her sister Juanita "Sue" Lehman, as well as daughters Karren Lehman and Judy Rogero, grandchildren Aaron Dunham, Justin Dunham, Johannah Dunham, Manuel Lopez, Clint Lehman, Mary Beth Reser, and 11 great grandchildren. She is preceded in death and is now reunited with her parents, Rudolph and Odra, sister Lucy, brother William "Doug," and daughter Kathy. Her family will say goodbye in a private ceremony in Florida. In lieu of flowers, the family requests that you hear Betty's story and commit to contributing to elder care resources in your community. We believe Betty's passing was entirely preventable, and we beg of you to open your eyes and hearts to supporting the dignified care of our elderly.

Betty Leffel passed away on August 30, 2020, with a joyful heart and the spirit of her Lord singing from within. No matter what she faced, Betty faced it head on, with a smile and a song. Born on June 26, 1934, Betty overcame a life filled... View Obituary & Service Information

The family of Betty Leffel created this Life Tributes page to make it easy to share your memories.

Send flowers to the Leffel family.