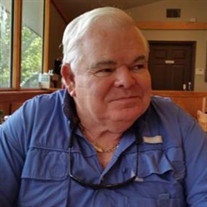 Fred Robert Gould II, 78,of Palmetto, FL,a much loved husband, father, son, and brother, passed away Sunday morning September 22, 2019, in Bradenton, FL. Fred was born September 26, 1940 in Philadelphia, Pennsylvania, to the late Leo F.and Winifred Livesey Gould. He grew up along the Delaware River in Edgely, Pennsylvania. When he was four he was given his dog Jet, and his first boat, which led to his life-long passion for fishing, boating and his love of animals. Endless hours spent with his friends,water skiing,fishing, or playing baseball, resulted in very special life long friendships. Summers as a youngster were often spent at family summer homes on Long Beach Island, NJ, clamming and fishing in the bay and ocean. Fred attended Delhaas HS in Bristol, and Bucks County Technical School. He was a member of St. James Episcopal Church in Bristol. As a teenager, he began hunting in Wellsboro, PA, with family and friends, and later in New Mexico. He loved to dance on American Bandstand in Philadelphia, and race his Jersey Speed Skiff in PA and NJ. He was a member of the Order of DeMolay, and a member of the National Powerboat Association. On June 20, 1964 he married Linda Hartenstine in Manheim, PA. They settled in Edgely and began raising their two sons. He was a volunteer fireman with the Edgely Fire Department, and belonged to the Bristol Yacht Club. In 1972 he moved his family to St. Petersburg, FL. He had many hobbies that he always lovingly shared with his family and friends. These hobbies included fishing, dancing, boating, boat racing, hunting, traveling and camping, woodworking, rebuilding cars and trucks, fixing just about anything, and collecting antiques. His work experience was included, Patterson Parchment Company, Auto Body Repair/Mechanic, Electricians Helper, GSE Mechanic. He was a member of the United Steelworkers (USW) Union, Teamsters Union, and International Union of Elevator Constructors. As an Entrepreneur, his businesses were always a family affair, including: FG Trucking, Gould’s Mobile Marine, KOA Campground Owner/Operator, and Mobil Gas and Service Station Operator. Fred won fishing tournaments,and won third place in a NPBA race on the Delaware River with his Jersey Speed Skiff. One of the most meaningful accomplishments, a result of overcoming a personal challenge in his life, was being presented The Flight For Freedom Award by the Florida Literacy Coalition, Inc. in 1998. Fred is survived by his loving wife of 55 years, Linda; son Fred III, his wife Star, their daughters: Kaili and Lindsey, of Palmetto, FL,and Jasmine of St. Catherine’s, ON; son Todd, his wife Susan and their daughters: Rachel and Reagan,of Kennesaw GA; stepmother Katherine Gould of Manahawkin, NJ; sister Constance Kline, her husband Marshall of Cheraw, SC, their sons James, Lee,and Kenneth; stepsister Karen Strange and her husband John of Severna Park, MD, their son Kevin and daughter Jennine; stepbrother David Braun of Philadelphia, PA, his daughters Stacey and Kimberly; brother in-law Harry Hartenstine of Boerne, Tx. Fred is also survived by other loving in-laws, cousins, long time friends, and his loving dog Snowy. Fred loved his family more than he could ever express, and was happiest when he was with them. He was a devoted, protective husband, father,and grandfather. He loved sharing his knowledge, and was always ready to help. Fred was a remarkable, courageous, strong, adventurous man, always willing to learn. He was most peaceful and calm when surrounded by the beauty of nature. His joy of living was a powerful source in his life and the lives of those who knew and loved him. Till we meet again. A Celebration of Life service will be held October 17, 2019 at 2 PM at St. Mary's Episcopal Church 1010 24th Ave. West Palmetto FL 34221. In Lieu of Flowers the family asks that donations be made to thedyslexiafoundation.org, or dyslexiaida.org. “I saw the angel in the marble and I carved until I set him free” Michelangelo

The family of Fred R Gould II created this Life Tributes page to make it easy to share your memories.

Send flowers to the Gould family.