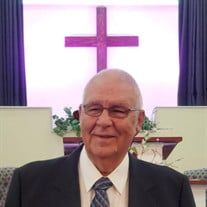 James “Jim” L. David, 77, of Palmetto, went home to be with his Lord, on monday, October 25, 2021. Born February 2, 1944 in Trough Creek Valley, PA, he was the oldest of six children of the late Clyde L. and Verna M. (Black) David. Jim graduated from Hazleton High School where he played football and was a member of the debate team. He attended Millersville State College where he continued to play football. Jim proudly served as a member of the Army Reserve for 6 years. Jim spent forty-five years working in the banking/mortgage industry. He started in Connecticut with Connecticut National Bank and People’s Savings Bank. In Michigan, he started his own mortgage company, running AmeriFirst Financial Corp and eventually joined with Ameri Mortgage. Upon leaving Ameri Mortgage, he continued to perform mortgage services helping people on an as needed basis as a sole proprietor. Jim, being devoted to serving the Lord, spent his time studying the Bible and repairing and providing fishing equipment to ministries and families. He was a Trustee and member of Colony Baptist Church in Ellenton, where he taught Sunday School and worked in the audio/visual booth doing sound and live streaming events. He was also involved with numerous remodeling projects for the building. Jim took up fishing with his son at a young age and become an avid fisherman. He could be found wetting a line anywhere there was water. He will be remembered and missed by his wife of 56 years, Marian (Weston); his son, James L. David Jr. and his wife, Susan; his daughters, Rebecca Mangas and Denice David; his grandchildren, Brian, Samuel, Jacob, Alyssa, David, Andre and Luke; his great-grandchild, Kyree; his sisters, Patricia (Ron) Lawrence, Tina (Roger) Bennett, Naomi Nolen, Debbie (Frank) Caudle and Rachel (Don) Tompkins. Family and friends will gather Friday, October 29, 2021 at 10am until time of service at 11am at Colony Baptist Church, 2920 US Hwy 301N, Ellenton. He will be privately interred at Skyway Memorial Gardens. Arrangements entrusted to Skyway Memorial Funeral Homes & Gardens.

The family of James L. David created this Life Tributes page to make it easy to share your memories.

Send flowers to the David family.