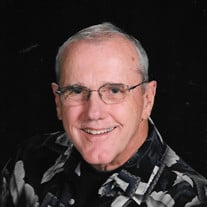 Larry’s remarkable life….. Larry was born to Mary Louise and Leaton Cornelius Meachum, as the third of four children: L.C. Jr., Donald, and Carolyn. Larry held Degrees in Religious Education and Psychology. His first job out of high school was with a cotton factory in Durham, North Carolina. Larry’s passion for people and religion spanned his lifetime. He loved to sing and was an avid choir member where he met Evelyn, his wife of 61 years. Larry and Evelyn married June 15, 1957 and raised four children – Darrell, Larry, Cheryl, and Lori. After starting his career in criminal justice in North Carolina as a Rehabilitation Counselor in the early 1960s, Larry led a noteworthy and newsworthy career within criminal justice. Larry served several Governors from both Republican and Democratic administrations as the head of the Corrections Departments in Massachusetts, Oklahoma, and Connecticut. While in Massachusetts in the 1970s, Larry’s emergency reassignment of inmates to other institutions after putting down a prison riot led to a landmark Supreme Court case. The State lost in court all the way to the Supreme Court, where SCOTUS upheld Larry’s emergency actions. Meachum v. Fano is taught in law schools today. Larry is credited with being among the very first to implement penal boot camps in Oklahoma in 1983; a feat he later considered the biggest error of his career. Larry later determined shock incarceration programs fed into the worst instincts of human beings, harming both staff and inmates, and ultimately, was ineffective in preventing recidivism. Larry retired in 2001 from the Department of Justice in Washington DC in 2001, as Director of the Office of Justice Programs, Correction Program Office. Larry was responsible for implementing the corrections portion of the Violent Crime Control and Law Enforcement Act of 1994, the so called Crime Act Larry is still recognized for his moral and ethical leadership within state and federal corrections; and as the voice of corrections during the Clinton administration. Larry’s legacy of evidence based practices and decision-making are still felt within the department today. Larry and Evelyn initially retired to Kure Beach NC before moving to Palmetto to enjoy the Florida sunshine. Always active in his church and fellowship, Larry enjoyed helping all and mentoring those in need. Larry is survived by his wife Evelyn, his children Darrell, Cheryl, Lori, and his brother LC

The family of Larry Ray Meachum created this Life Tributes page to make it easy to share your memories.

Larry was born to Mary Louise and...

Send flowers to the Meachum family.