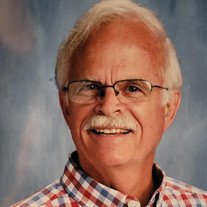 Mike Oglevie, 74, of Ellenton, FL, formerly of Columbus, NE, died Saturday, January 1, 2022, at his home, surrounded by his loving family after an unexpected, brief battle with Creutzfeldt-Jakob Disease (CJD). A small gathering will be held on Tuesday January 4, 2022 from 6-7:30pm at Skyway Memorial Funeral Home 5200 US Highway 19 Palmetto, FL 34221. A celebration of life will be held at Highland Park Church in Columbus, NE, tentatively planned for April 30th. Mike was born April 27, 1947, in Superior, NE, to Gene and Darlene (McNichols) Oglevie. He graduated from Columbus High School in 1965, Wayne State College in 1969, and received an MBA from Ottawa University in 1999. On January 29, 1967, he married his high school sweetheart and love of his life, Carol Killham, in Columbus, NE. Together, they had two children, Beth and Matt, and lived throughout Nebraska in Wayne, Bellevue, Omaha, Fremont, Norfolk, Superior, and Columbus. Mike held a variety of roles during his career including Mutual of Omaha, personnel manager at Lutheran Hospital in Norfolk, NE, hospital administrator at Broadstone Memorial Hospital in Superior, NE, and director of human resources for the City of Columbus, retiring in 2017. He taught gymnastics and tumbling for nearly 50 years, sharing his love for Jesus and providing an example of a life well-lived. Never one to relax during retirement, he was known most recently as “Mr. Mike”, working as a para educator for Palma Sola Elementary in Bradenton, FL, prior to his death, as well as a “jack of all trades” for Easy Turf in Ellenton, FL. Mike was active in every community he lived in, donating gallons of blood over 50 years, organizing fundraising events such as the “Run, Walk, Crawl” in multiple communities, promoting the United Way, and was an active organizer each year for the National Day of Prayer. He volunteered for many roles at the churches he attended, serving the Lord with music and youth ministries. He was a friend to everyone he met and never hesitated to help someone in need. He enjoyed singing loudly to music of all kinds (which his children tolerated in their younger years and enjoyed as adults), photography, and working in his woodshop. Survivors include wife Carol (Killham) Oglevie of Ellenton, FL; daughter Beth Mueller (Gary Mueller) of Kansas City, MO; son Matt Oglevie of Menlo Park, CA; granddaughters Danielle Mueller (Joe Irwin) of Columbus, NE and Maddie Mueller of Kansas City, MO; great-grandchildren Logan and Lily Mueller of Columbus, NE; sister Charlotte Rodgers of Arvada, CO; sister-in-law Janie (Stephen) Nance of Ellenton, FL; brother in law Larry Killham (Rudy Esquivel) of Savannah, GA; and numerous nieces, nephews, and cousins. Mike was preceded in death by his parents, Gene and Darlene Oglevie, and parents-in-law Bob and Lucille Killham. In lieu of flowers, if a memorial is desired, please donate to the organization of your choice, or to the family to be donated to multiple causes. Because of Mike’s giving spirit, and the suddenness of his incurable disease, the family has made arrangements with the National Prion Disease Pathology Surveillance Center in Cleveland, OH, with the hope that the study of his death will make an impact on a possible future cure for CJD.

Mike Oglevie, 74, of Ellenton, FL, formerly of Columbus, NE, died Saturday, January 1, 2022, at his home, surrounded by his loving family after an unexpected, brief battle with Creutzfeldt-Jakob Disease (CJD). A small gathering will be held... View Obituary & Service Information

The family of Mike Oglevie created this Life Tributes page to make it easy to share your memories.

Send flowers to the Oglevie family.