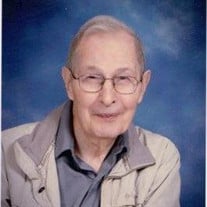 Thomas Evan Webb Friday, March 4th, 1932 - Thursday, November 14th, 2019 Thomas Evan Webb, 87, of Navarre, FL passed away at Santa Rosa Medical Center from complications from a 25 year fight against Parkinson’s Disease. He was raised on a farm in Mannville, Alberta, Canada and attended a one room schoolhouse until 8th grade before graduating from Mannville High School in 1952. After studying diligently he earned a BS in Honours Biochemistry from the University of Alberta in 1956, and his MS in Biochemistry in 1957. In 1961 he earned his PhD in Biochemistry from the University of Toronto. While at U of T, he met his future wife, Ellen, at a dance and they were married in 1961. He continued his training with post doctorate work at the National Research Council in Ottawa, Ontario and the McArdle Memorial Lab for Cancer Research in Madison, WI. As an assistant professor and acting director of the Cancer Unit for 5 years, he conducted cancer research at McGill University in Montreal, Quebec. He then moved to Columbus, Ohio in 1970 and dedicated almost 30 more years of teaching and research to finding a cure for cancer at the Ohio State University as a Professor in the Department of Molecular and Cellular Biochemistry. He and his wife are both cancer survivors. He retired to Florida and enjoyed spending time with his wife and grandchildren, his dogs, traveling, attending church, walking on the beach and learning about old radios and antique cars. He was preceded in death by his father, Donald Webb and mother, Sarah (McMinis) Webb, both formerly of Fort Saskatchewan, Alberta. He is survived by his loving wife of 58 years, Ellen Webb; beloved daughters Linda Treglia (John) of Columbus, OH and Sharon Mavity (Graham) of Navarre, FL; Treglia grandchildren Stefan, Aaron and Dillon; and Mavity grandchildren Brenner, Lauren, Kerra and Casey. He is also survived by brother, Ronald Webb (Helen) of Drumheller, Alberta; sister, Donna Clark (Joseph) of Sherwood Park, Alberta; and nieces and nephews. A funeral service will be held on Thursday, November 21, 2019 at St Paul United Methodist Church (4901 Gulf Breeze Parkway, Gulf Breeze, Florida 32563). Visitation will be at 10:15am with the funeral service at 11:00am. Pastor Christina Shaver will officiate. Funeral arrangements are being handled by the Trahan Family Funeral Home in Milton, FL (Trahanfamilyfuneralhome.com). Interment is on Saturday, November 23, 2019 at 11 am at Skyway Memorial Gardens in Palmetto, FL (Skywaymemorial.com) In lieu of flowers, you are welcome to make a Tribute Gift to the Parkinson’s Foundation (Parkinson.org) or a memorial gift to the James Comprehensive Cancer Center at The Ohio State University (Cancer.osu.edu) Gift Acknowledgements may be sent to [email protected] John 14:1-7 “Let not your hearts be troubled. Believe in God; believe also in me. In my Father’s house are many rooms. If it were not so, would I have told you that I go to prepare a place for you? And if I go and prepare a place for you, I will come again and will take you to myself, that where I am you may be also. And you know the way to where I am going.” Thomas said to him, “Lord, we do not know where you are going. How can we know the way?” Jesus said to him, “I am the way, and the truth, and the life. No one comes to the Father except through me. If you had known me, you would have known my Father also. From now on you do know him and have seen him.”

The family of Thomas E Webb created this Life Tributes page to make it easy to share your memories.

Send flowers to the Webb family.